Diotto and the Medieval Festival in Scarperia 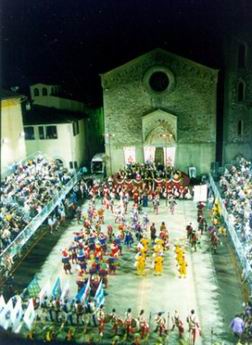 Diotto and the Medieval Festival in Scarperia

A small town of Scarperia becomes much more livable in September. Starting with the first Sunday of September, a number of events take place here. Held on September, 8, Diotto is the main one among them.

For a couple of days, Scarperia turns into a medieval town again. Ladies and knights, musicians and dancers, standard bearers and fire fighters walk along streets. Palace guardians maintain order.

Anvil sounds are heard around the town. Blacksmiths show their art which brought worldwide fame to Scarperia. Local farmers present various foods at the festive market. You can enjoy local cuisine at numerous taverns where traditional meals cooked by old recipes are offered to guests.

While the medieval festival, only special currency is used. It is fiorino di Scarperia or “florin from Scarperia”. Treasurers from two changing places change money so that guests can satisfy their needs.

Rificolonata festival is held on September, 7. Especially its vivid colors appeal to kids. The festival originated in Florence; it has spread to many other locations around the Tuscan capital. Lanterns of various shape and color are the main attribute of Rificolonata. Their tender light makes special fairytale atmosphere.

September festivals culminate in Scarperia on the 8th.

The name Diotto originated from the Italian word “eight” - «otto». It brings back Scarperia foundation by the Florentine Republic in September 1306. To be exact, the seventh of September is the date of foundation, but the holiday has been moved the eighth to combine with one more great event – Lady Maria’s birth date.

Right after twilight sets in on the 8th of September, chimes are heard meaning that transfer of authority ceremony has started. At 9 the old gates of the Vicar Palace open, and the former governor walks out accompanied by more than one hundred people. The procession moves along streets of the town with sounds of pipes and drums to meet the new appointed vicar at the Florentine gates, Porta Fiorentina. In festive atmosphere the new governor gives oath to the Florentine Republic and receives full powers.

The tournament in honor of the new vicar is held. It consists of five contests. Taking craft traditions of the town, it is likely that knife throwing, lancio dei coltelli, is the most remarkable one among them. Besides, tug-of-war or tiro alla fune as well as running with bricks or corsa sui mattoni, competitions in speed climbing on vaulting pole or palio della cuccagna and running in harvest barrels or corsa delle bigonce are organized.

Teams of six people take part in competitions representing different town districts. Results of their performance are summed up. The team which gets the majority of points gets the Diotto pendant.

The first Diotto historic reconstruction was held in Scarperia in 1954. However, it was only after the year of 1963 when the ceremony of the new vicar’s appointment was included in the program making the holiday very special.