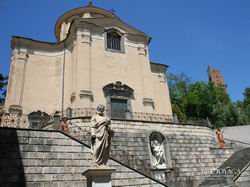 The town of San Miniato was founded in the VIII century.

The settlement appeared in the central part of the “Franks road”, on the way from Pisa to Florence. The crossing over the Arno river was situated right here. Strategic importance of the town was also determined by its location on a high hill, which allowed to control surroundings.

A favorable location influenced the life of the town. The history of San Miniato is closely connected with the names of such glorious emperors of the Holy Roman Empire as Otto I and Frederick II. The latter one ordered to build an emperor palace, which, unfortunately, has not been retained until today; it was severely damaged in 1944. Yet, the palace tower (Torre di Federico II) reminds us about the lapsed greatness. Even now it is considered to be the town symbol. You can enjoy here a fascinating scenery.

The Roman Cathedral of the XIII century is located in downtown, its interior was restored in barocco style. Close to it you can find the Palace of the Beneficiaries founded on the base of the ancient defensive curtain. The Cathedral Square (Prato del Duomo) has a wonderful view on the river valley and the ancient Etruscan city of Volterra. Another famous sacral buildings in San Miniato are Sant Catherine Church (Santa Caterina) and Sant Francesco Abbey, founded on a slope of a hill in 1211.

Numerous buildings of the XIV century create the image of the town. The Palace of Griffoni is one of the most beautiful Renaissance among them.

San Miniato is especially popular with visitors in November. Various cultural events are held in the town during it. The main one is the annual fair of white truffles. You can buy them every November weekend but for the first one. Not only gourmets, but also lovers of national traditions come for the feast.