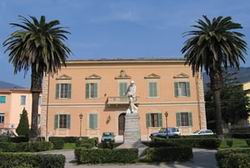 A tiny rural town of Calci is located approximately 13 kilometers to the east from Pisa.

The area in Calci, known as Valgraziosa, lies at the foot of the Monte Pisano hill range. Geological peculiarities of this land gave the town its name. At Roman times, it was called „Locus Calcis“, which in Latin means “the chalk stone place”. There are numerous open pits close to the town, where chalk stone is extracted.

In the Middle Ages the power in Calci was taken over by the Pisan Bishop. A number of abbeys were built during that time, most of which have been preserved until today.

The Certosa di Pisa Cartesian Abbey is located not far from Calci. It was founded in the year of 1366. Unfortunately, the barocco frescoes, which decorated the interior in the XVIII century, haven't been preserved. Certosa di Pisa is one of the largest conventual centers not just in the province, but in the whole Tuscany.

The architectural masterpieces of Calci include the parochial Church of Pieve Ss. Giovanni ed Ermolao. It is remarkable for the magnificent Roman style facade. The Church was erected as early as in the XI century, but the bell tower has remained unaccomplished. While in the Church, don't forget to draw your attention to the marble font of the XII century.

Present day Calci specializes mainly in agriculture. The famous Tuscan olive oil and wool are produced here. Thick forests provide wood for Tuscan docks. Agritourism is one of the main sources for local economy. The town and its outskirts offer a lot of options for comfortable recreation.