Traveling to Tuscany with Kids 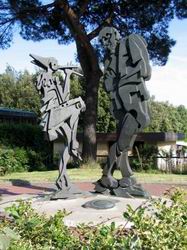 Tuscany is one of the most popular tourism centers of Europe. It attracts not only adults, but also little travelers. There are attractions here which will be interesting exactly for kids.

For example, there is a museum in the capital of Tuscany, Florence, where exhibitions are specially designated for kids and teenagers. It is the Museum of Ragazzi (ragazzi means boy, teenager). To be more exact, it is a chain of museums, which are united through an educational program (Associazione Museo Dei Ragazzi Di Firenze). These museums include the Palazzo Vecchio, the Branacacci Chapel in Sant Maria dela Carmine Abbey, the Historical Museum of Florence (Museo storico topografico Firenze com’era), and the Museum of Leonardo da Vinci (Museo Leonardiano di Vinci). Displays, guided tours, educational movies are waiting for young visitors here.

A Florence neighbor, Siena, is also great to spend a vacation with kids. Tourists under the age of 11 will definitely like the Children's Museum Bambimus, which is a part of the Santa Maria dela Scala center. Kids explore the world of art and its history through performances, plays, photo exhibitions, movies, talks. The topics regularly change, so that kids get acquainted with different periods of culture. If you want to visit this museum, don't forget to arrange it in advance, as prior registration is required.

One more destination to visit in Tuscany with kids is Collodi. It is famous for the writer Carlo Lorenzini, who used the name of his hometown as his pen-name. Under the name of Carlo Collodi he became known as the creator of the Wooden man. Afterwards, there appeared the Pinoccio Park in honor of this character. Well-known Italian masters created statues of loved all over the world characters, portraying episodes form the book.

But Tuscany for kids is even more. There is a prehistoric park close to Peccioli (Parco Preistorico). The idea to create such a park stroke the owner of the land when he found fossil shellfish and traces of ancient animals on it. Today you can see here prehistoric remains as well as about twenty models of extinct animals, for example a Brachiosaurus. Besides, there is an almost real (active!) volcano on the territory of the park.

Traveling to Tuscany with kids? - What a great idea!