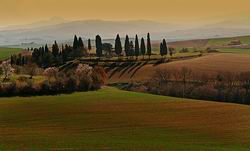 Val d'Orcia is the valley of the Orcia river. It is located in the southern part of Siena province, Tuscany region, Italy.

In 2004 the cultural heritage of the Val d'Orcia was included into the UNESCO World Heritage List.

Cultural exploration of the Val d'Orccia was especially intensive in the Renaissance period. It was the place where figures of the Renaissance tried to realize the conception of aesthetic nature exploration. The created ideal landscape was often portrayed in works of the Siena school artists. Depiction of a man in harmony with nature became a unique symbol of Renaissance and had a great influence on the development of landscape thought.

Five towns-communes located nearby, Pienza, Montalcino, San Quirico d'Orcia, Castiglione d'Orcia and Radicofani have taken care of the Val d'Orcia valley preservation since the middle of the XX century.

Their main target was to combine cultural and economic development of the region. Members of the organization spread information about ethnic, cultural and natural uniqueness of the valley, and by this way encouraged tourism development. Besides, measures were taken to facilitate production and increase sales of local goods, first of all, farm products and wine.

Geologically, Val d'Orcia dates back to about five million of years ago. At that time, the sea level lowered, and sand and clay started to form the Val d'Orcia. After the volcanoes of Radicofani and Amiata erupted, a part of the valley got covered with igneous rock, called trachyte. Erosion, which resulted in ravines, beds of streams and the Orcia river, completed the process of the region formation.

Spending a vacation in the Val d'Orcia valley is a chance to feel the spirit of Renaissance man and nature harmony.